GeoClub. The Power of Geographic Information, Communities and the Web 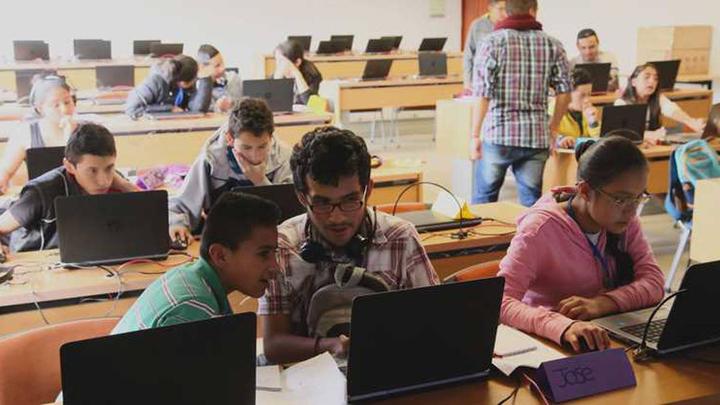 Clubes de Ciencia Colombia (Science Clubs Colombia) is an initiative from a group of Colombian scientists at Harvard University whose goal is for Colombian researchers studying or working abroad to share their knowledge and experiences with Colombian high school students. When I knew about this project, two main reasons encouraged me want to be part of it: the first is personal and simple, I wish somebody had told me when I was at the age of those kids that scientists are flesh and blood people looking to advance knowledge to solve the real problems that society faces. The second is because I think kids have the wrong idea about geography as a discipline and they should know about the true role of Geographers in science and society. This is how the idea of creating a week-long GeoClub emerged.

One of the main objectives of our GeoClub was to change the common misconception that Geography is about learning capitals’ names and where they are, or simply, to trace or make maps. We wanted to tell kids that modern geography is the study of the earth and its relation with the humans that inhabit it, and therefore it is a broad and fascinating discipline that is pretty much related to everything around us. However, despite the broad field that geography is, the GeoClub had to be focused on topics that could be covered in a week, and more importantly, on topics that allow kids to relate advances in this discipline to their every-day activities. With my co-instructor Johan Avendano we proposed a syllabus for the GeoClub covering the following general concepts:

As it was outlined in the invitation to the GeoClub, this workshop was focused on presenting these basic concepts and how the technological revolution of the last decades has influenced the way we study the Earth and the dynamics and processes that occur on it. For this, we proposed to work on individual or group projects that would consist of making a web map aimed at informing on any current social issue. Initially, we used the idea of a risk map as example, but as soon as students participated in the discussions, they came out with other ideas and identified their own interests. The most attractive ideas were selected by group voting, some of them were:

The results of this first task highlighted the students’ creativity and intellectual capacity. It was amazing to see how they took the concepts discussed in class and found their application in areas related to their own interests. Valuable discussions about the power of information and its veracity emerged as we talked about some of the methods, tools and technology to acquire and contribute to the geographic information that exist nowadays. Then, led by curiosity and eagerness to change and solve the daily problems that affect their neighborhoods, students make web maps about the following topics: Points with common traffic problems in Soacha, Proposal to improve my neighborhood, Most contaminated places in Bogota, Points of cultural significance in Soacha, Endangered animals of the world, and others.

In general, I think it was clear for students that information is dynamic and that although maps are not the final goal, they become useful tools to inform, question and more importantly to analyze and understand processes and dynamics that occur in their territories. Without using technical language, students can lose the fear of using GPS devices, create geodatabases, design, create and publish their web maps; and more importantly, they identified the projects in which they worked during the week themselves.

On the other hand and beyond these results, I think the most valuable result of Clubes de Ciencia was the opportunity for those kids and for us – the instructors- to share ideas, experiences and dreams. These are kids living in areas with high social vulnerability who are already looking for ways to solve problems in their communities and society, and who want to know how science is a vehicle to do so. Personally, what I most admire about these kids is their infinite eagerness to learn and their group-working skills, besides their spirit of solidarity that takes them to help others and become tutors.

Finally, I want to thank all the people who make the GeoClub possible, and the Clubes de Ciencia team who funded my trip.